Bronwen McGarrity is a former Gravesham Borough Councillor for the Coldharbour ward, where she is standing again in the 2nd May 2019 elections.

Bronwen has lived in Gravesham all of her life. She was first elected as a Gravesham Borough Councillor in 2007 and was proud to have been elected Mayor in 2009.

She was the first 'Special Councillor for the Elderly' in the Borough and dedicates all of her spare time working to make life better for senior citizens. Bronwen has worked with a number of bodies and charities including:

In her professional career Bronwen was a secondary school Maths teacher for over 40 years in Gravesend and Strood.

Our pledges for Coldharbour

We know how important it is to people that we have clean streets so we will lobby for more public waste bins and regular street cleansing, along with facilitating regular community litter picks in the local area. 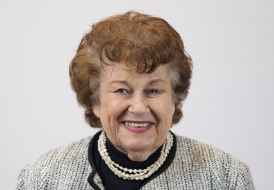